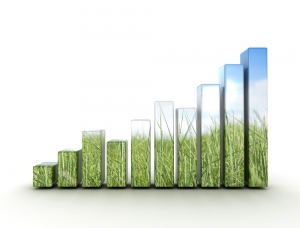 The Intergovernmental Panel on Climate Change is preparing to formally release its comprehensive Fifth Assessment United Nations climate report (AR5) next October in Denmark, though the Working Groups within the project are already starting to publish their findings.  The prognosis is grim but not unexpected. The scientists contributing to the report’s research are in agreement that humans are responsible for rising levels of atmospheric carbon and thus for recent temperature increases.  This will have profound ramifications for corporations, particularly for their relationship with natural resources.

KPMG released a publication in 2012 entitled Expect the Unexpected: Building business value in a changing world, which identifies ten sustainability “megaforces” that are projected to impact business across all industry sectors in the coming decades.  In today’s global economy, such megaforces as water scarcity, population growth, and urbanization will all shape the way business is conducted.  The report posits that the process of “decoupling human progress from resource use and environmental decline [will be] the central challenge of our age,” and businesses that emerge successfully through this transition will be more resilient and therefore protected against risks.  The concept of decoupling is an accepted way to reconcile the disparity between our planet’s apparent finite resources and thus far infinite (and virtually exponential) economic growth: economic growth can be possible without relying – at least as much – on natural resources or raw materials.  Waste elimination, recycling, and other methods of increasing operational efficiency will all provide ways for businesses to expand their output and economic growth while shrinking their ecological footprints.

The KPMG report goes on to discuss different industries by sector and explore which may be the most vulnerable to these sustainability megaforces.   As per the Industry Classification Benchmark (ICB) system, KMPG identifies the following 11 industry sectors:

The Food Producer and Beverage industries, conversely, appear to be facing particularly devastating changes resulting from the sustainability megaforces.  Not only is their environmental intensity actually increasing, but the “environmental costs of the Food Producers sector could outweigh their entire earnings.” (Expect the Unexpected)  Beverages have significant exposure to these megaforces, with high exposure to water scarcity, food security, climate change, population growth, ecosystem decline, and with partial exposure to energy and fuel, deforestation, and urbanization.  Similarly, Food Producers will be highly exposed to climate change, water scarcity, ecosystem decline, population growth, wealth, energy and fuel; and potentially exposed to urbanization.

While decoupling is clearly a necessary process for all industry sectors to explore, it is worth further exploring just what this may mean.  Author Jackson of “Prosperity without Growth” stresses that there are actually two types of decoupling, relative and absolute.  Relative decoupling relies on increased efficiency to accomplish its goal: lowering the ecological intensity of industry activity relative to the GDP (Jackson).  With continuously growing GDP, however, ecological intensity may still ultimately rise even when employing relative decoupling.  Absolute decoupling means that the absolute ecological impact declines, regardless of what is happening with the economy.  Jackson proposes some potentially radical methods by which we may achieve absolute decoupling, including curbing economic growth.  While those ideas aren’t tenable in today’s economy, it is certain that now is the time to be making ecological investments in carbon reduction, infrastructure changes, and ecosystem protection among others (Jackson).  Furthermore, the KPMG report shows a stark future ahead for industry sectors that fail to reduce their environmental intensity in some form or fashion.  Creativity and innovation has always been vital for businesses, but will be increasingly so as they pivot to meet the coming sustainability challenges.